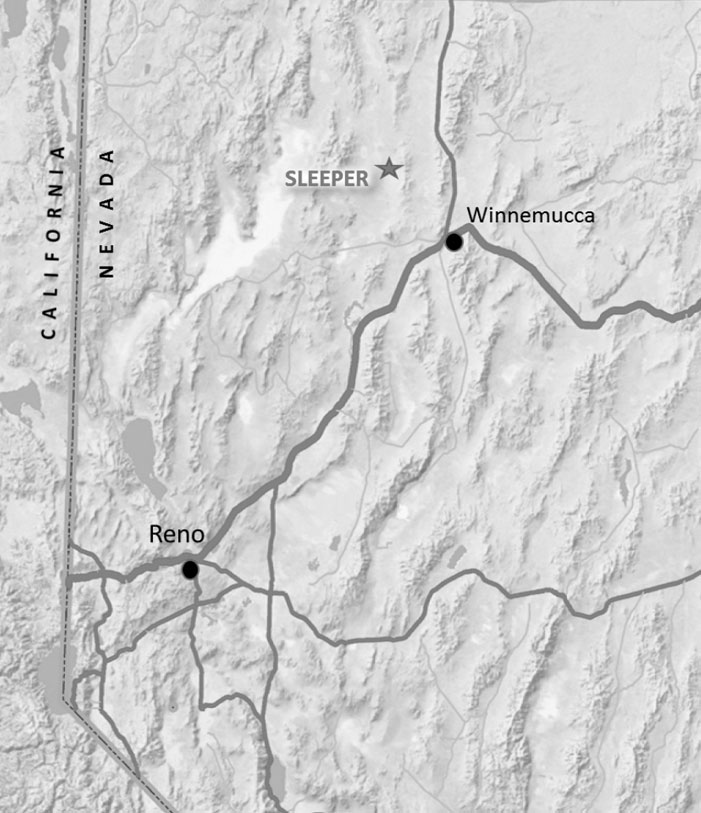 Paramount Gold Nevada owns a 100% interest in the Sleeper Gold Project, a former high-grade open pit gold producer located off a main highway approximately 25 miles northwest of the town of Winnemucca, Nevada. The famed Sleeper mine was operated by AMAX Gold Inc. (“Amax”) from 1986 until 1996, producing 1.66 million ounces of gold and 2.3 million ounces of silver.

Paramount has assembled a district-scale project with significant unexplored gold potential. The project is 100% owned with a land position that includes staked and purchased lands of approximately 44,917 acres stretching south on trend to Newmont’s Sandman Project.

Amax’s mining operation left a legacy of superb infrastructure in place including excellent accessibility by all-weather roads to and within the property; electrical power (from the Nevada State grid); and water (two operating, deep water wells are located on the property).

The Company is reporting a mineral resource estimate as prepared by QP, RESPEC Company LLC with an effective date of June 30, 2022.  To determine the estimate the following material assumptions and criteria were used:
​​​​​​​
•    The Sleeper deposit has the potential to be mined by open pit methods.  The Mineral Resources were tabulated to reflect potential open pit mining and heap leach and bio-oxidation extraction as the primary scenario.  To meet the requirement of reasonable prospects for eventual economic extraction, a pit optimization was run using the parameters summarized in following Table:

•    The pit shell created by the optimization was used to constrain the mineral resources, which are reported at a cut-off grade of 0.137 g Au/t for oxide and mixed materials, whereas the sulfide material is reported at a cut-off grade of 0.251 g Au/t.  The gold cut-off grade was calculated using the processing, general and administrative costs, gold price, recovery, refining cost, and royalty provided in above Table.  The mining cost is not included in the determination of the cut-off grade, as all material in the conceptual pit would potentially be mined as either ore or waste.  The reference point at which the mineral resources are defined is therefore at the top rim of the pit, where material equal to or greater than the cut-off grade would be processed.
•    The metal prices used in the pit optimization and the determination of the gold cut-off grade and gold-equivalency factor are derived roughly from three-year moving-average prices as of August 2022 ($1,750/oz and $22/oz for gold and silver, respectively).
•    The open pit resource estimates are based on a 30,000 tonnes per day processing rate, with processing assumed to consist of crushing, milling, and first-stage gravity separation followed by carbon-in-leach recovery.

Inferred resources, effective June 30, 2022, consist of a total of 215,546,000 tonnes with an average gold grade of 0.349 g Au/t and an average silver grade of 3.53 g Ag/t, for 2,417,000 contained ounces of gold and 24,458,000 contained ounces of silver. The resources are constrained within an optimized pit, reflecting the potential for open pit mining and heap-leach processing of the present Sleeper deposit. The Sleeper resources are comprised of 21% oxidized, 27% mixed, and 52% unoxidized materials. The in-pit resources are reported at cut-offs of 0.137 g Au/t for oxide and mixed material, and 0.251 g Au/t for sulfide material. The cut-off for unoxidized materials reflects the potential for bio-oxidation prior to leaching.

Notes:
• The estimate of mineral resources was done by RESPEC in metric tonnes.
• Mineral Resources comprised all model blocks at a 0.137 g Au/t cut-off for Oxide and Mixed within an optimized pit; 0.251 g Au/t for Sulfide within an optimized pit; and 0.137 g Au/t for dumps.
• The average grades of the Inferred Mineral Resources are comprised of the weighted average of Oxide, Mixed, Sulfide, and dumps mineral resources. Alluvium mineralized materials are not included in the mineral resources.
• Mineral Resources within the optimized pit are block-diluted tabulations. Dumps mineral resources are undiluted tabulations.
• Mineral Resources that are not Mineral Reserves do not have demonstrated economic viability.
• Mineral Resources potentially amenable to open pit mining methods are reported using a gold price of US$1,750/oz, a silver price of US$22/oz, a throughput rate of 30,000 tonnes/day, assumed metallurgical recoveries of 72.7% for Au and 28.2% for Ag, mining costs of US$2.00/tonne mined, heap leach processing costs of US$3.08/tonne processed, bio-leach processing costs of US$9.84/tonne processed general and administrative costs of $0.46/tonne processed. Gold and silver commodity prices were selected based on analysis of the three-year running average at the end of August 2022.
• The effective date of the estimate is June 30, 2022.
• Rounding may result in apparent discrepancies between tonnes, grade, and contained metal content.

In completing the Sleeper TRS, the Company undertook a comprehensive review of the project’s database which included over 4,000 drill holes dating back to the early 1980s from the time of the first discovery of mineralization to when the mine was closed in 1996.  Given the lack of digitization of the original drill hole database, the Company has, under the direction of QP RESPEC, engaged in digitizing and re-verifying the entire Sleeper database.

​​​​​​​The completion of the data verification is expected to improve the confidence level applied to the resources and would allow for improved 3D modelling. Paramount will continue to advance the evaluation of Sleeper to update the Initial Assessment in 2023.

In July 2012, PGSC announced the staking of 920 new lode mining claims (the “Mimi Project”) adjacent to the west and immediately south, of the Sleeper Gold mine. The Mimi Project totals 18,400 acres.
In 2013, PGSC announced several results of a drilling campaign which was focused in and around the existing resource and pit areas. Assay results extended the mineralization east and south of the existing resource, opened up new depth potential below the existing sleeper pit and intercepted exceptional results in several zones. Additionally, PGSC undertook an extensive database review and as a result, a total of 473 core and RC holes have been re-logged and new cross-sections were generated. Paramount completed a re-interpreted lithological and structural model which will allow us to plan a new drill program and to update our mineralized material estimate model.


In August 2014, PGSC dropped a total of 212 mining claims from the Dunes and Mimi areas of the Sleeper Gold Project. These claims no longer had any geological value to the Company.

In August 2015, Paramount completed an initial geophysical survey which consisted of a helicopter magnetometry study. The survey defined several possible exploration targets which were reviewed by our geological team. Additional surveys on areas covered by overburden will be evaluated for further testing. This testing can include Induced Polarization programs or other indirect methodologies. The Company believes that the resulting data derived from the geophysical program will produce valuable drilling targets. Future drill programs will be designed with the aim identifying new zones of mineralization with an emphasis on areas covered with overburden.
​​​​​​​

In April, 2021, Paramount purchased 152 unpatented lode claims from South Sleeper Resources LLC for a total consideration of $365,441. The claims are located approximately 2 miles south of past producing Sleeper Gold Mine. The purchased claims carry a mineral production royalty based on a Net Smelter Returns (“NSR”) of one percent (1%). The purchased claims are without known mineral reserves.

The Sleeper Gold Project is situated within the western part of the Northern Nevada Rift a geologic province of Miocene age that hosts several productive gold mining camps. The project is located along the western flank of the Slumbering Hills–a north trending mountain range bounded by faults.  Faults on the flank of the range are north-northeast trending and drop the Paleozoic stratigraphy exposed in the range and the Miocene volcanic rocks down into the Desert Valley.  These faults have accumulated down-throw of more than 1,000 meters and have focused hydrothermal gold-bearing fluids toward the surface.  One of these favourable north-northeast trending faults controls the location of the Sleeper Gold deposit.

Gold concentrations in the Sleeper Gold Project have been recognized in four distinct settings:
​​​​​​​

Within the Sleeper Gold Project all of these gold occurrences have been identified, but the intermediate and late stage mineralization are the styles that were exploited historically and brought notoriety to this Northern Nevada Gold Camp. These main stage mineralizing events are interpreted as a high sulfidation system, intimately associated with Miocene intrusive rocks and generated from magmatic fluids emanating from that source.
​​​​​​​

In the extensive land package associated with the Sleeper Gold Project, two of the key components for the discovery of additional high-grade vein systems have therefore been established.  These lands contain north-northeast trending faults to provide a trap for gold mineralization and Miocene igneous rocks, a source for gold-bearing fluids.  The mining district that contains the Sleeper Gold Project is constrained on the north end by the historical Sleeper mine and the extensive known resource and on the south end by Newmont’s Sandman deposit.  Between these deposits, the north-northeast trending faults and Miocene igneous rocks are our focus with systematic direct and indirect exploration to find concentrations of high-grade gold.