WATCH VIDEO SUMMARY OF THE RELEASE

Winnemucca, Nevada – November 8, 2021 – Paramount Gold Nevada Corp. (NYSE American: PZG) (“Paramount”) announced today it has initiated a reverse circulation drill program to test several exploration targets identified by our team and Mine Development Associates (“MDA”) in our joint evaluation designed to bring the Sleeper Mine back into production.

Paramount Gold Nevada owns a 100% interest in the Sleeper Gold Project, a former high-grade open pit gold producer located off a main highway approximately 25 miles northwest of the town of Winnemucca, Nevada. The famed Sleeper mine was operated by AMAX Gold Inc. (“Amax”) from 1986 until 1996, producing 1.66 million ounces of gold and 2.3 million ounces of silver. Paramount has assembled a district-scale project with significant unexplored gold potential. The project land position includes staked and purchased lands which brings the total holdings to approximately 60 square miles or about 40,000 acres.

Paramount President and Chief Operating Officer Glen Van Treek stated: “After a thorough review of the extensive database of historic assays and geophysical data during the first half of the year, our technical team has identified numerous drill targets. We are excited to have started this first phase of drilling and for the potential of discovering another high-grade “Sleeper type” deposit.

As part of the Company’s ongoing effort to restart the historic Sleeper Gold Mine, Paramount contracted MDA in December of 2020 to evaluate the following:

•    The most prospective drill targets with the goal of defining a new high-grade Sleeper type vein deposit;
•    Priority drill targets within the Sleeper deposit which could improve the overall grade and confidence level of the current resource;
•    A scoping level study comparing various processing and throughput alternatives for restarting production at Sleeper; and
•    Define the parameters of a new technical report.
​​​​​​​

Rachel Goldman, Paramount CEO stated: “The current gold price environment has made Sleeper a much more attractive asset, and as such, a more prominent focus of our exploration activities within our well diversified asset portfolio. We look forward to receiving the results of this drill program, which will help to guide the next phases of exploration and development on our largely unexplored land package in and around the former high-grade Sleeper mine.”

The initial ~8,000-foot drill program has been designed to drill an area east of the original Sleeper mine that lies on the margin of a structural occurrence known as a ‘range-front fault’. In Nevada, these favorable geologic occurrences have acted as, or generated conduits for precious metal bearing fluids that fed mineralized deposits including Sleeper. In the Sleeper district, this feature is marked by a transition from ‘high density’ Jurassic-Triassic rock to the ‘lighter’ Tertiary volcanic sequences where the Sleeper mineralization is hosted. This major transition or break, together with other favorable structural zones, can be mapped in the field by geologists or, when covered by alluvium, using geophysical surveys. The Paramount team used a gravimetric survey to map the variations in density due to rock changes or significant alteration processes. At Sleeper, these favorable structures trend south-south-west, converging on the new claims recently acquired by Paramount. 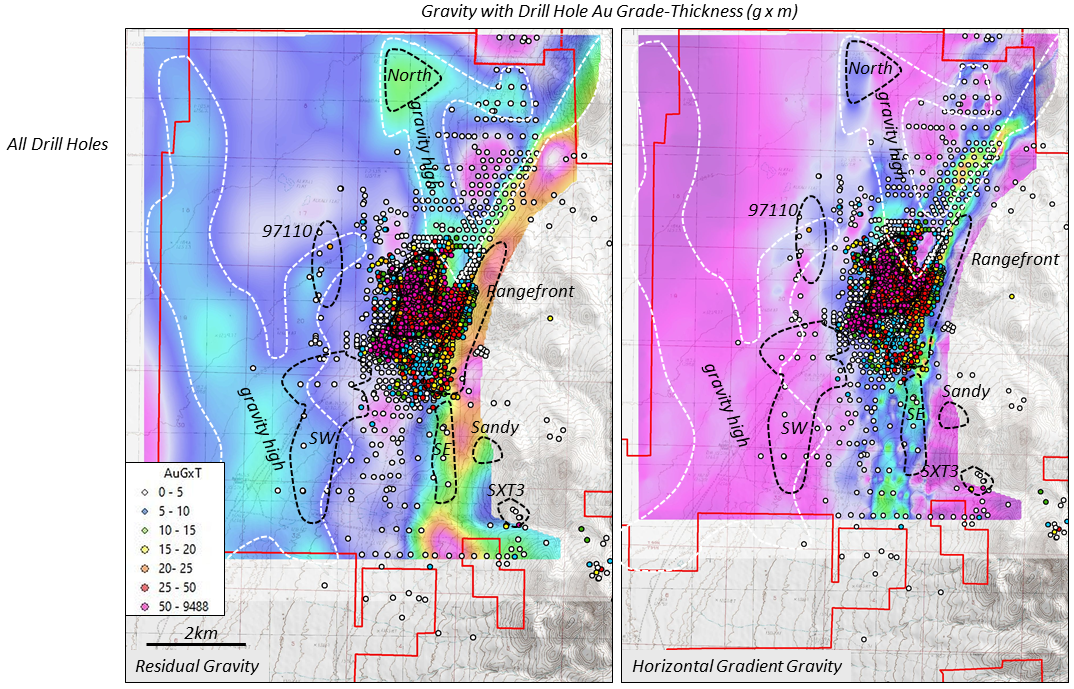 About Paramount Gold Nevada Corp.
Paramount Gold Nevada Corp. is a U.S. based precious metals exploration and development company. Paramount’s strategy is to create shareholder value through exploring and developing its mineral properties and to realize this value for its shareholders in three ways: by selling its assets to established producers; entering joint ventures with producers for construction and operation; or constructing and operating mines for its own account.

The Sleeper Gold Project is located in Northern Nevada, the world’s premier mining jurisdiction. The Sleeper Gold Project is host to a large gold deposit (over 4 million ounces of mineralized material) and the Company has completed and released a positive Preliminary Economic Assessment. With higher gold prices, Paramount has begun work to update and improve the economics of the Sleeper project and search for additional high-grade deposits similar to the former producer.

Safe Harbor for Forward-Looking Statements
This release and related documents may include "forward-looking statements" and “forward-looking information” (collectively, “forward-looking statements”) pursuant to applicable United States and Canadian securities laws. Paramount’s future expectations, beliefs, goals, plans or prospects constitute forward-looking statements within the meaning of the United States Private Securities Litigation Reform Act of 1995 and other applicable securities laws.  Words such as "believes," "plans," "anticipates," "expects," "estimates" and similar expressions are intended to identify forward-looking statements, although these words may not be present in all forward-looking statements.  Forward-looking statements included in this news release include, without limitation, statements with respect to the use of proceeds from the Offerings. Forward-looking statements are based on the reasonable assumptions, estimates, analyses and opinions of management made in light of its experience and its perception of trends, current conditions and expected developments, as well as other factors that management believes to be relevant and reasonable in the circumstances at the date that such statements are made, but which may prove to be incorrect. Management believes that the assumptions and expectations reflected in such forward-looking statements are reasonable. Assumptions have been made regarding, among other things: the conclusions made in the feasibility study for the Grassy Mountain Gold Project (the “FS”); the quantity and grade of resources included in resource estimates; the accuracy and achievability of projections included in the FS; Paramount’s ability to carry on exploration and development activities, including construction; the timely receipt of required approvals and permits; the price of silver, gold and other metals; prices for key mining supplies, including labor costs and consumables, remaining consistent with current expectations; work meeting expectations and being consistent with estimates and plant, equipment and processes operating as anticipated. There are a number of important factors that could cause actual results or events to differ materially from those indicated by such forward-looking statements, including, but not limited to: uncertainties involving interpretation of drilling results; environmental matters; the ability to obtain required permitting; equipment breakdown or disruptions; additional financing requirements; the completion of a definitive feasibility study for the Grassy Mountain Gold Project; discrepancies between actual and estimated mineral reserves and mineral resources, between actual and estimated development and operating costs and between estimated and actual production; the global epidemics, pandemics, or other public health crises, including the novel coronavirus (COVID-19) global health pandemic, and the spread of other viruses or pathogens and the other factors described in Paramount’s disclosures as filed with the SEC and the Ontario, British Columbia and Alberta Securities Commissions.

Except as required by applicable law, Paramount disclaims any intention or obligation to update any forward-looking statements as a result of developments occurring after the date of this document.